NVMe SSDs: We tested them out, but are they that fast?

What is an NVMe?

This is a type of hard disk connection that uses a PCI Express bus to connect to the processor. This kind of connection is much faster than the SATA bus connection used by conventional hard drives or solid state drives. In addition to having a fast transfer rate, NVMe also enables parallel data transfer, pending transfer management and performance monitoring.

NVMe has already become the new standard for more demanding users, especially for business users. This becomes quite obvious when you look at the newest laptops and high-end desktop workstations that already have NVMe drives, the same goes for Apple mobile devices and some Android smartphones.

All of that sounds great in theory but how does it perform in real life? We tested the actual speed of the NVMe disk.

For our test, we compared three drives that use three different technologies. First up was a HDD from one of the most well known hard drive manufacturers - Seagate, we tested the model ST1000LM048. We also decided to test the best value for money drive from our store‘s SSD section - we tested the Kingston A400. Finally we tested the NVMe disk that randomly caught our eye - the Transcend 110s.

For the three tests, we used the exact same computer with "CrystalDiskMark" software, which allows us to performa a speed test on the device itself. During this test, the program analyzes the reading and writing speed of the device. In practice, this means the speed of data transfer to the disk (write speed) and the speed of data transfer from the disk, e.g. booting the operating system or a program (read speed).

Seagates' ST1000LM048 HDD was the first one. With a reading speed of 120 MB / s and a writing speed of 95 MB / s, we can say that by today's standards this drive is almost unusable for everyday use. Keep in mind that these hard drives are still cheaper than their competitors, making them the perfect choice for storing certain data such as movies, pictures, and music. 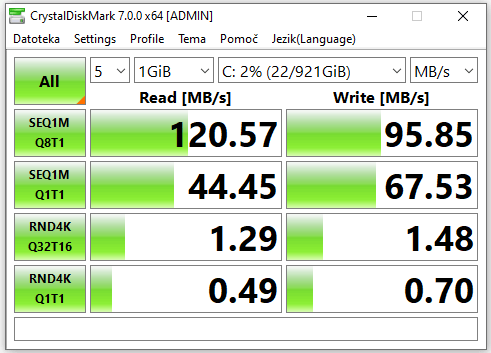 SSD drives have set a new standard. Due to the high read speeds, they perform the best as the primary disk on which you install the system and programs. System and program startup will be lightning-fast and system responsiveness is much better. The results of our test showed that the mentioned SSD drive has up to four times higher read speeds than ordinary hard drives. How will this result compare to the NVMe disk results? 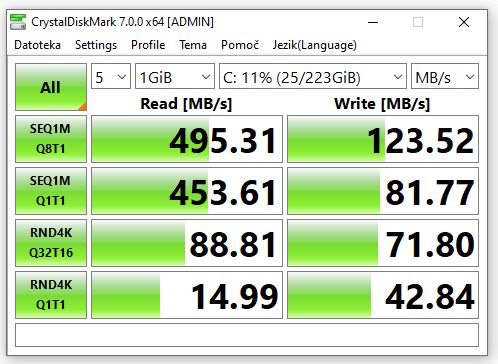 While SSD drives are the standard, NVMe drives are now becoming more and more popular. They are already present in all of the top tier business laptops. How did reading and writing speed turn out in real life? 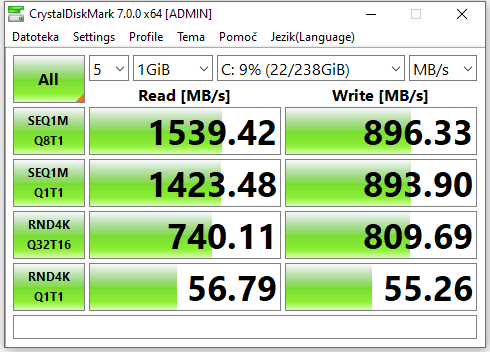 With a read speed of 1500 MB / s, NVMe SSD drives are on average up to three times faster than regular SSD drives. When choosing a new computer or laptop, it’s a good idea to see if scalability is possible or if the computer already has an NVMe solid state drive. Working in such a system is a real pleasure!

We should also mention the writing speeds, which are arround 900 MB per second on the NVMe SSD, which is almost 8 times faster compared to our SSD device. Have NVMe drives convinced you?

We have quite a few computers and laptops that come with NVMe SSD drives available in our store!

How do NVMe drives work? 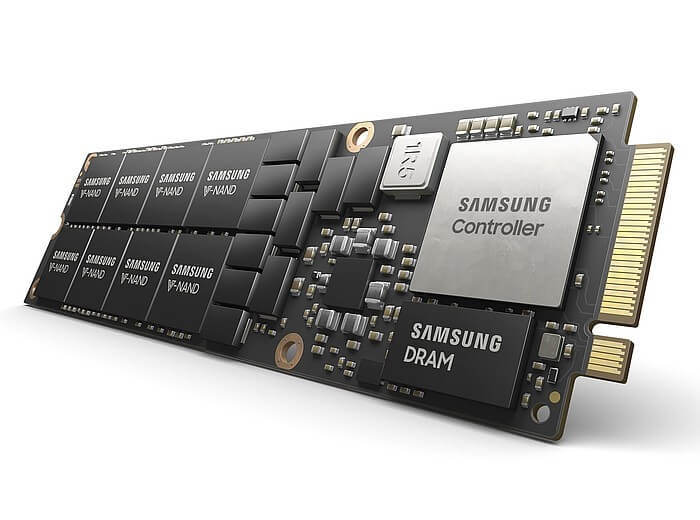 The SATA III bus bandwidth can be doubled if two interfaces are used for one drive, which is an unpractical, expensive, and wasteful solution. Instead, NVMe is the perfect solution and standard for the future, an ideal choice when using advanced SSD drives.

When transferring data via the PCI Express bus, NVMe can use up to four bus lanes, through which data is streamed simultaneously. Each PCI Express band can transmit data at 4 GB / s or 32 Gb / s, which is more than 5 times faster than the theoretical maximum allowed by SATA III. Although no SSD drive is currently able to utilize the full bandwidth and reach the maximum speeds allowed by the NVMe connection, this potential is certainly attractive when it comes to the development of SSD drives in the future. Above all, there is no need to settle for relatively low speeds - data transfer is fast and responsive to operating system and memory bus capabilities, making data transfer much faster and responsive in practice.

Modern NVMe SSD drives are mostly available in M.2 format. This drive looks like a small chewing gum, but still offers plenty of space for an impressive collection of NAND cells and is typically connected via an interface specifically reserved for the M.2 drive located on the motherboard. You can also connect the M.2 module to a PCI Express card that accepts M.2 SSD drives. This is exactly the way many NVMe SSD drives that are installed in the slot for PCI Express devices are sold. Some manufacturers of the M.2 module attach the module to a PCI Express card, but the differences in this case are only visible in borderline cases with very demanding use. 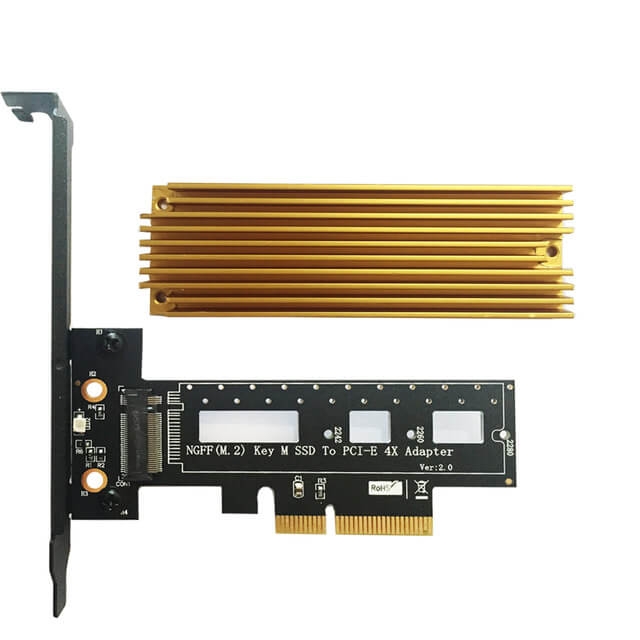 Using an NVMe SSD drive on a PCI Express card does not offer any extra speed since it is still the same electronic connection between the memory controller and the processor. However, a PCI Express card may offer better cooling depending on the fans and heat sinks used, with a larger surface area making these accessories more efficient.

We have quite a few computers and laptops that come with NVMe SSD drives available in our store!