We had an interesting case this week at our computer service centre in Nova Gorica. A customer turned to us who owns a few-years-old Fujitsu Siemens laptop, which has recently caused her quite a lot of problems.

Every now and then, it would shut itself down, which bothered her quite a bit. As soon as we took the laptop into our professional treatment, we first suspected a motherboard failure. A failure in the motherboard often occurs in both new and old laptops, but we can proudly say that we solve it most of the time at our computer service.

A more in-depth diagnostics of the customer’s computer revealed another very common mistake. Over the years, a lot of dust and other dirt had accumulated on the fan, which obstructed the flow of air. As a result, the laptop was overheating. You can see on the photo how what that looks like. 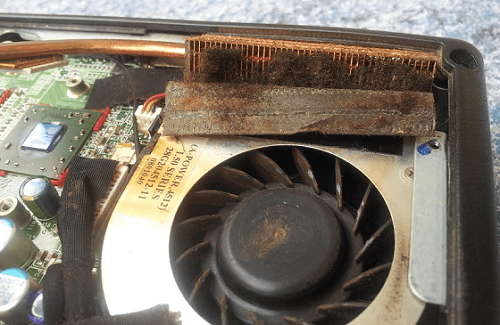 Clogged cooling system on the laptop

We cleaned out all the dirt and replaced the thermal grease on the processor. We’re now testing the laptop. It seems that the repair was successful since the computer no longer shuts itself down and isn’t as hot to the touch as it used to be.

What could have happened if the customer hadn’t brought the laptop in for maintenance in time?

Sudden shutting down of the computer or laptop during operation can have very bad consequences. Disk failure occurs in many cases, and there is a high probability of losing the data we have stored on the computer.

A motherboard failure is also possible, which results in a tremendous amount of costs as repairing the motherboard isn’t exactly cheap because it requires a lot of time and accuracy.

How can we protect ourselves?